Due to an expected very low tide, our boat man Philip asked for a prompt departure from Donaghadee at 17:00 on Friday 22nd March to avoid as much as possible any potential of grounding on the other side’s South Landing. Chris Acheson and Peter Smyth packed up the Mermaid with equipment for working on the electrical system, food and some supplies for the weekend ahead.

A smooth crossing over and onto the island for around 17:50 was met by a loud reception from a large contingent of various types of gulls. A buzzard was sighted in the air and seemed to enjoy hanging in the wind much like a kestrel would over the west of the island, where it appeared at different stages over the weekend, briefly joined by another larger buzzard for an hour or so on Saturday morning. A few household tasks were taken care of on Friday night with an early willow warbler caught in the heli trap followed by furled nets being deployed in preparation for Saturday morning. A small number of shearwaters were caught on the ground later on after dark, then to bed not too late. Chris made an early start on Saturday catching some chiffchaffs, goldfinches, reed buntings and dunnocks in the nets and whilst the sun made an appearance, the strong easterly wind was a constant presence over the weekend which seemed to slow down the amount of birds arriving. Robins and meadow pipits made an appearance in the nets too.

Throughout Saturday, Peter worked on the electrics in an attempt to start the system up after a long winter of low light which resulted in the batteries running totally flat and unable to accept a charge. Unfortunately, the attempts to get the system going again were in vain and another plan is in progress to address via the off grid experts! Last seasons dead bracken was cleared from the ‘Puffin’ slope on the east side looking out to Mew to help with the eagerly anticipated return of these charismatic auks. There were no observations of the Puffins over the weekend, but we hope they are not far away. The slope is in good order with lots of burrows and the decoys all in place, so the next visit should hopefully have some good sightings. A female hen harrier spent some time quartering over Mew on Saturday late afternoon, being mobbed by hooded crows, gulls and even a skein of grey lag geese seemed to give off at her on the way past too. A pair of raven were observed flying between the two islands, they too were given a hard time by the gulls and their crow cousins. Sunday started very windy and with a few squally showers rolling in, the birding was slow with some linnet observed in the air and landing only briefly on the bushes around the walls. A pair of mallard visited the newly filled freshwater pond and seemed to enjoy dabbling around under the surface. A male teal was caught overnight on a wildlife camera at the pond showing a great return to use of the pond after its refurb in August past. Other birds were spotted down at the water’s edge drinking from the pond too, a real testament to the work in the summer. Some more observatory maintenance was carried out indoors during the rain showers and a close eye on the wind was needed as it looked possible that the boat may not be able to get out on Sunday afternoon. Wind measurements of constant force 5 with gusts of up to force 7 were taken, however after some closing activities, the Mermaid came into view around the east side of the big isle in a small window of less pressing winds. The crossing home was choppy but all back to Donaghadee safe and sound for 17:00. A good start, and the observatory is ready for a busy season ahead.

There will be a winter meeting, open to all, at the Medical Biology Centre (MBC) at Queens University (beside the City Hospital) on 24th January at 7.30pm. Entrance will be £2 and will include several guest speakers and tea and coffee. See below for more details

We are excited to announce an exciting opportunity for local artists being supported by Ards and North Down Borough Council on the Observatory in the coming weeks. Full details can be found on the dedicated section of our website under “News” or by clicking on the link below

The 2016 season gets off to a flying start with a “Barrow load” of Puffins…..

The 2016 season is off to a flying start with a barrow load of puffins! The decoys have been set and following our success last years with confirmed breeding on the Observatory we hope to build on our progress for this season! Scroll on down for a report of the first trip to the Island this year. 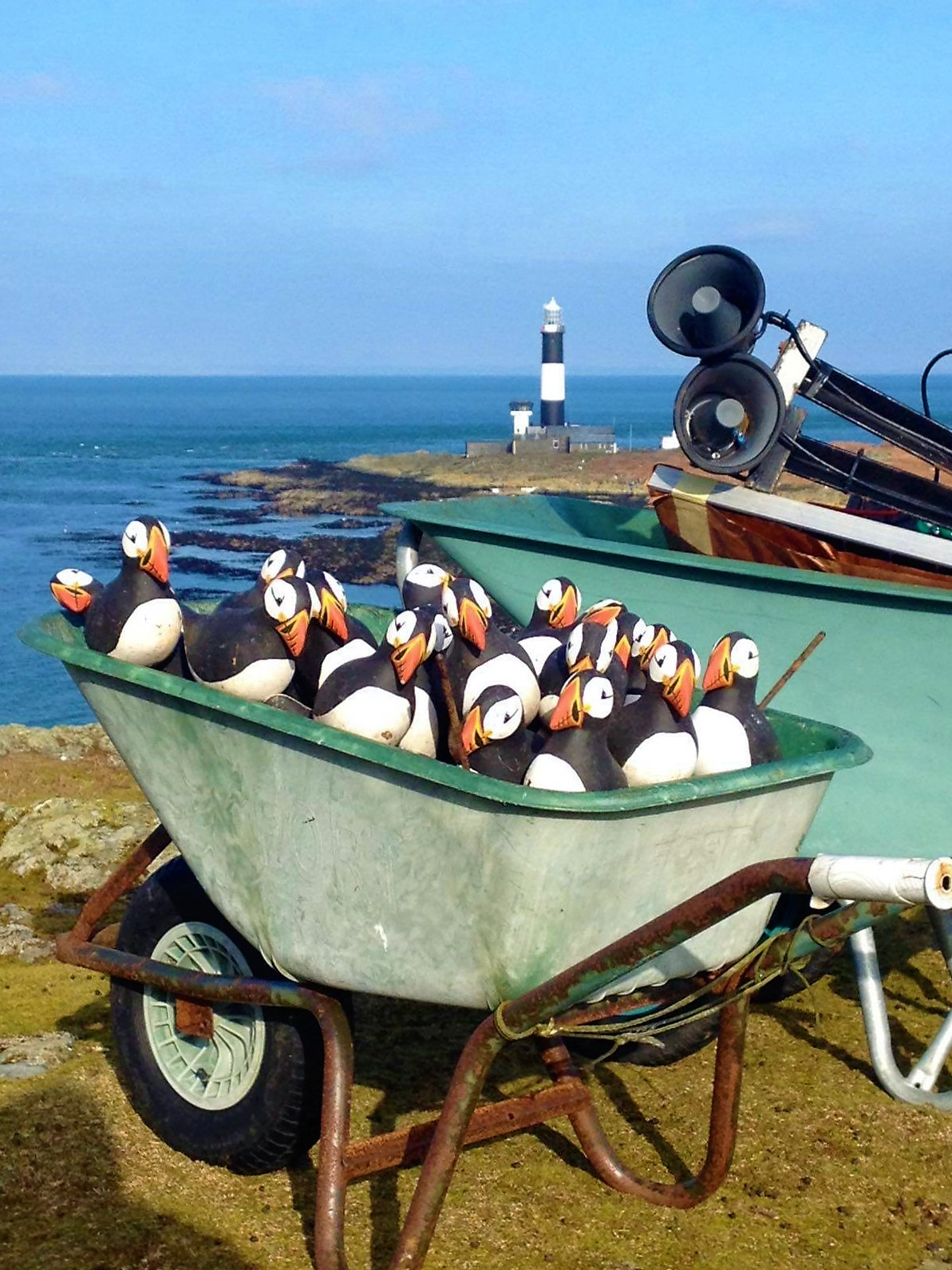 It’s been a busy July on CBO. Although we are still operating restricted manning, with overnight stays limited to two bubbles, we have managed to pack in quite a bit. Early July is ringing time for some of our gull (Herring & Lesser Black-backed) and Black guillemot chicks. On Saturday 10th, the CBO team were joined by Katherine Booth Jones & Daniel Johnston, two scientists from the British Trust for Ornithology (BTO). Katherine and Daniel have been conducting fieldwork under the MarPAMM project, tagging and tracking adult Black guillemots at various locations around our coast - including Lighthouse Island. The combined CBO/BTO effort resulted in 18 BG chicks, 39 Herring gull, and 31 Lesser Black-backed chicks being ringed.Weekend teams have continued with our ongoing Manx shearwater ringing project, now in its 58th year. On the night of Sat 24th July a bird (ring EJ13537) was recorded at the East Pub shearwater sub-colony which had been ringed as a chick on 28th August 1981 – almost 40 years beforehand! It’s amazing to consider the longevity of these birds. When this bird was ringed, Maggie Thatcher was PM, Shakin’ Stevens was in the charts with ‘Green Door’, and Coe & Ovett were interchanging the world mile record!The early morning passerine ringing – the mainstay of our ringing programme - has also continued, though numbers so far have been poor (partly due to Covid restrictions impacting manning), but includes Meadow Pipit, Blackcap, Willow warbler, Wren, Sedge warbler, Goldfinch, Dunnock, Blackbird, Robin and Whitethroat. Nocturnal ringing hasn’t been restricted to manxies; so far 17 European Storm petrels have been caught using tape lure. This figure includes one control – a bird ringed elsewhere - and we look forward to finding out the original ringing details. Storm petrels are a delicate looking - but hard-as-nails - little seabird and are usually seen only far offshore. Perhaps these birds may be scoping out future breeding grounds – one to watch in the future.The Puffins have been active, with counts over fifty recorded regularly. On Sat 24th, two were observed delivering a catch of Sand-eels to burrows.The habitat work is continuing, and last year’s purchase of four Austrian Scythes has proved a very useful investment. The growth this year has been astonishing, presumably due to a wet delayed spring combined with the recent heatwave.Finally, it’s not just birds! Moth trapping has become increasingly popular, and the photos show some recent catches (Moth names are brilliant!).One other event of note was a botanical survey of the two outer islands, Lighthouse and Mew, conducted by local botanical recorders on 6th July. The aim of this is to establish a baseline record for future reference, and match our present flora against historical records. Many thanks to the Royal Irish Academy for supporting this project through their Praeger Grant in Natural History. The list is still being compiled but did include a few new records for Lighthouse Island. ... See MoreSee Less

What a lovely story! Many congratulations to Heather & David from CBO. ... See MoreSee Less
View on Facebook
· Share

The CBO Manx Shearwaters will feature on BBC Springwatch tonight. Tune in to BBC Two at 8pm to see if Gillian Burke will follow in the footsteps of Chris Packham and sniff a Copeland Manxie, as he did back in 2010!Megan McCubbin Hannah Stitfall BTO British Trust for Ornithology Northern Ireland Seabird Network ... See MoreSee Less

It was a monitoring day on the outer islands on Sunday 16th May, with one team ringing Eider duck on Mew Island, and another conducting a large gull nest count (Herring & Lesser black-backed) on Lighthouse Island. On Mew, 25 new Eider were trapped and ringed (all females) and, just as importantly, 24 previously ringed birds were retrapped. Considering the birds we missed, we reckon the outer Copeland islands must host around 200 breeding Eider - making them one of the most important sites for this sea duck around the Irish coast. On Lighthouse island a team of 9 counted gull nests - using the standard technique of dropping pasta shells beside the nest and counting what’s left over. 975 nests were counted, with an estimate breakdown of 585:390 (HG: LBBG), again indicating the importance of the island as a safe breeding site, particularly for the red-listed (Birds of Conservation Concern) Herring Gull. Fifty Puffin were counted, and sighting of the day was a Bonxie (Great skua) flying into Belfast Lough, and our first Spotted flycatcher of the season on the island. ... See MoreSee Less

Last weekend saw the first overnight stay at CBO of 2021 though under current restrictions only one household/bubble can stay at any one time for the moment. So it was a quiet enough boat that headed out from Donaghadee on Friday evening with just two of us headed out to the island to stay. Upon first arrival we were treated to beautiful carpets of bluebells across the island and the front of the house is a riot of narcissus! We did not have the island to ourselves for too long as we were joined by a group of volunteers out for a day trip on Saturday to do some habitat management on the island. They did a brilliant job and were hard at work scything and mowing for most of the day! We are incredibly thankful for their hard work! Birds-wise, the island was similarly quiet with few migrants about potentially due to the calm, sunny weather. Some ringing highlights include 2 willow warblers, a chiffchaff and a wheatear. We also had a soaring buzzard over the island on Saturday and Sunday and a peregrine chilling out on Mew on Saturday. Ringing totals for the weekend include (numbers in brackets indicate birds previously caught): Wren 3 (5)Willow Warbler 1 (1)Reed Bunting 2Robin (1)Song Thrush 1Meadow Pipit 1 (2)Wheatear 1Blackbird (1)Chiffchaff 1 ... See MoreSee Less