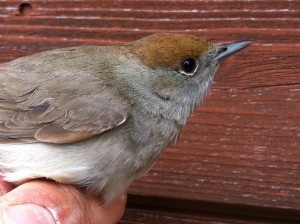 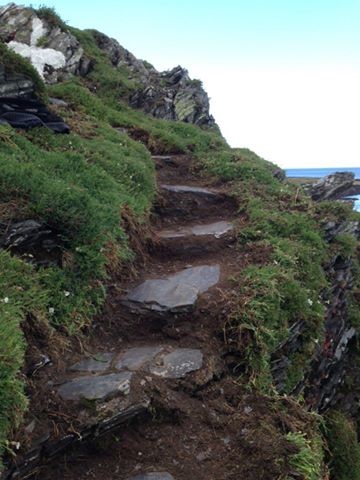 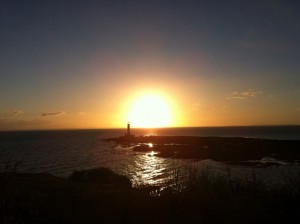 Last weekend saw the first overnight stay at CBO of 2021 though under current restrictions only one household/bubble can stay at any one time for the moment. So it was a quiet enough boat that headed out from Donaghadee on Friday evening with just two of us headed out to the island to stay. Upon first arrival we were treated to beautiful carpets of bluebells across the island and the front of the house is a riot of narcissus! We did not have the island to ourselves for too long as we were joined by a group of volunteers out for a day trip on Saturday to do some habitat management on the island. They did a brilliant job and were hard at work scything and mowing for most of the day! We are incredibly thankful for their hard work! Birds-wise, the island was similarly quiet with few migrants about potentially due to the calm, sunny weather. Some ringing highlights include 2 willow warblers, a chiffchaff and a wheatear. We also had a soaring buzzard over the island on Saturday and Sunday and a peregrine chilling out on Mew on Saturday. Ringing totals for the weekend include (numbers in brackets indicate birds previously caught): Wren 3 (5)Willow Warbler 1 (1)Reed Bunting 2Robin (1)Song Thrush 1Meadow Pipit 1 (2)Wheatear 1Blackbird (1)Chiffchaff 1 ... See MoreSee Less

Sometimes it’s just the wrong sort of good weather! On Friday 16th April a two-person ringing team departed from Donaghadee at 7am on a clear and sunny spring morning. The weather promised SSE winds – and that’s exactly what we want at this time of year to push the migrants our way on their journey northwards – but at the observatory the wind was just too strong and the skies just too clear, so most migrants passed overhead and didn’t drop down onto Lighthouse Island.The early morning journey outwards was rewarded by sightings of some late Brent geese and a Red-throated diver, and a leucistic ‘white’ Shag was spotted standing on the rocks on Big Copeland.On arriving on the island net rides were cleared and catching boxes set up and the team waited, and checked the nets & traps, and waited… a grand total of two birds were ringed all day, both Robins! Some migrants, however, were recorded passing through – Sand martin, Song thrush, and a collection of large crows – a dozen Rook (an unusual record on CBO, mostly in spring), and twenty Hooded; and a Willow warbler was singing in the small plantation at the front of the observatory buildings.The first returning swallow was also spotted, and the population of Meadow pipit has built up to around twenty.Some habitat maintenance was performed, with the team removing dead vegetation from the Heli traps and clearing some paths, and the walkways around the buildings were scrubbed to remove winter’s build up of moss and algae.The weather remained bright and sunny all day, albeit with a continuous and fairly strong breeze; the Antrim coastline was just about visible, encouraging migrating birds continue on their way.Spring flowering is well underway, with stands of Marsh Marigolds in full bloom in the ditches and wet areas, and the island taking on a blue hue with the Bluebells peeking through. In all 41 bird species were recorded, with the following additions to the 2021 list: Fulmar: 10 circling cliffGrey HerronPeregrine: 1 maleSwallowBlackbirdSong thrushRook: 12MagpieChaffinch ... See MoreSee Less

Navigating both local restrictions and the crossing from Donaghadee, a bubbled work party travelled to the island to begin reopening tasks and clearing areas for wildlife that winter has left behind.Lots to do across the island, however initial areas to work on were identified and the bubble worked hard throughout the day clearing dead bracken on the puffin slopes, scrubbing very slippery jetties, checking and cleaning the well, reworking the syphon for the loo with a view and checking over the biosecurity markers.With very fortunate timing, 6 puffins arrived in the sound as the work on their slope was being completed, great to see them back again and hopefully the clearance works encourage them to nest again in the burrows this season.Other activities on the day included stock taking of resources, assessment of winters impact to the buildings and environment and a litter pick across the rocks and shingle to the east. Another 4 helium balloons with long ribbons tangled up were removed along with bottles, crisp packets, polystyrene and various other bits and pieces.Hopefully with progress across the Covid restrictions, we will bring positive news about opening up visiting again soon, watch this space.Narcissi & daffodils are in full bloom. We think these are very old varieties - the keepers & their families abandoned the island in the 1880s. The yellow cultivar is Narcissus 'Telamonius Plenus (D4 Y-Y), along with Primrose Peerless - the English name of Narcissus x medioluteus (the hybrid between N. poeticus and N. tazetta, a classic example of a Poetaz daff).With a high count of 32 seals on Mew, and around 35 different species of bird observed on the trip, the wildlife is getting on with it regardless.Birds observed on the day:GannetManx ShearwaterGreylag GooseShelduckMallardEiderTealBuzzardSparrowhawkPheasantOystercatcherCurlewBlack-headed GullCommon GullHerring GullLesser Black-backed GullGreat Black-backed GullSandwich TernPuffinBlack GuillemotGuillemotRazorbillWoodpigeonStock DoveSand MartinRock PipitMeadow PipitPied WagtailWrenRobinWillow WarblerJackdawHooded CrowLinnetReed Bunting ... See MoreSee Less

Sorry we’ve been a bit quite on the Instagram front. Mid-Feb; freezing cold; but you can sniff the evenings getting longer. Spring will come soon enough. Some spring shots from Lighthouse Island in 2020. ... See MoreSee Less

It’s probably fair to say that if you’re looking at or following the CBO Facebook page you have an interest in our environment. Hence, may we direct you to this environmental index survey, developed collaboratively by DAERA, Food Bio-Sciences Institute, Queen’s University Belfast and Keep Northern Ireland Beautiful, and is being promoted through the cross-sectoral Live Here Love Here initiative?Results will be used to help inform policy development, for academic and statistical research, and to better understand how to increase our interaction with nature and improve the value we place on it.Happy New Year all!We are delighted to launch the new Environmental Engagement Index in partnership with the Department of Agriculture, Environment and Rural Affairs, Queen's University Belfast and Live Here Love Here. The Environmental Engagement Index is unique to Northern Ireland as we lead the way in exploring engagement and connection to nature by using this yearly survey. Research has shown that if people are engaged with nature they are more likely to look after it.To take part in the survey visit eei.liveherelovehere.app/For further information visit www.daera-ni.gov.uk/news/minister-launches-environmental-engagement-index-northern-ireland ... See MoreSee Less